On the morning of 7 July 2017, thousands of activists were on their way to demonstrate against and block the G20 summit in Hamburg. A group of around 200 people also set out from a camp in Altonaer Volkspark in the early morning. In Rondenbarg, a street in an industrial estate in Hamburg-Bahrenfeld, they were attacked and brutally beaten up around 6:30 a.m. without warning by the Blumberg Evidence and Arrest Unit (BFE), which is best known for its violence. Numerous activists were injured. Eleven of them suffered partially open fractures when they were pushed by the police to a railing which collapsed and caused activists to fall into the car park several meters below. 59 people were arrested on the spot, 14 of them were even taken into custody – sometimes for weeks and months.

The events at Rondenbarg have become a political issue in Hamburg: The police had claimed that the group had thrown bottles and firecrackers at them on a massive scale. Shortly after the summit, however, videos of the operation appeared which refuted the police’s account. They show a demonstration slowly approaching the police. Very sporadically, bottles fly, then the police officers storm off and bring the activists down very brutally. In the aftermath, the Hamburg police missed no opportunity to criminalise the events at the Rondenbarg. In December 2017, 23 flats in several federal states were searched by the so-called Soko „Schwarzer Block“ (special commission „black bloc“) in connection with the „Rondenbarg complex“ and at every press conference the police conjured up images of the left-wing enemy.

In the meantime, more than 85 activists have been charged by the Hamburg public prosecutor’s office in the so-called „Rondenbarg Complex“. They are accused of breach of the peace, dangerous bodily injury, resisting and assaulting law enforcement officers, damaging property and forming armed groups.

After a first trial in the „Rondenbarg Complex“ against the Italian comrade Fabio V. had already failed in February 2018 after a five-month trial without result, another trial against the five youngest accused is now scheduled to start in December 2020 – three and a half years after the G20 summit – as a „pilot trial“. They belong to a group of 19 accused juveniles and adolescents who will be tried under juvenile criminal law due to their age at the time. The application of juvenile criminal law means that the proceedings against the five comrades from the Stuttgart, Mannheim, Bonn/Cologne and Halle areas who are now affected will be conducted in camera.

The proceedings do not only mean a criminalisation of the G20 protests, but are of considerable importance for the entire political movement. After all, the accused are not accused of any individual crimes. According to the construct of the public prosecutor’s office, the mere presence of the accused on the spot should be sufficient to assume that they acted together and to justify a conviction for breach of the peace (§ 125 StGB). The public prosecutor’s office thereby adopts a judgement of the Federal Court of Justice from May 2017, in which the Federal Court of Justice ruled in the case of a hooligan fight that the offence of breach of the peace does not have to involve one’s own participation or (psychological) aiding and abetting – which is actually the prerequisite for criminal liability – but that the so-called „ostentatious marching along“ is already sufficient. If this legal concept were to prevail in the area of assemblies, any participation in a demonstration in the future would be associated with enormous criminalisation risks. Crimes committed by individuals could thus be attributed to all persons present at the demonstration. 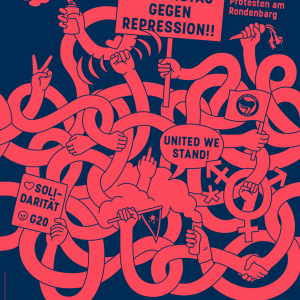